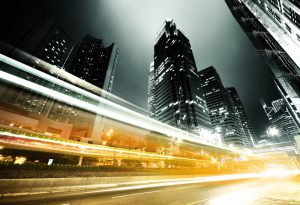 Light is fundamental to biological systems, affecting the daily rhythms of bacteria, plants, and animals. Artificial light at night (ALAN), a ubiquitous feature of urbanization, interferes with these rhythms and has the potential to exert strong selection pressures on organisms living in urban environments. ALAN also fragments landscapes, altering the movement of animals into and out of artificially lit habitats. Although research has documented phenotypic and genetic differentiation between urban and rural organisms, ALAN has rarely been considered as a driver of evolution. We argue that the fundamental importance of light to biological systems, and the capacity for ALAN to influence multiple processes contributing to evolution, makes this an important driver of evolutionary change, one with the potential to explain broad patterns of population differentiation across urban–rural landscapes. Integrating ALAN’s evolutionary potential into urban ecology is a targeted and powerful approach to understanding the capacity for life to adapt to an increasingly urbanized world.