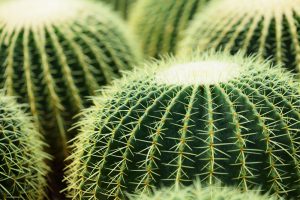 Naturally dark nighttime environments are being widely eroded by the introduction of artificial light at night (ALAN). The biological impacts vary with the intensity and spectrum of ALAN, but have been documented from molecules to ecosystems. How globally severe these impacts are likely to be depends in large part on the relationship between the spatio-temporal distribution of ALAN and that of the geographic ranges of species. Here, we determine this relationship for the Cactaceae family. Using maps of the geographic ranges of cacti and nighttime stable light composite images for the period 1992 to 2012, we found that a high percentage of cactus species were experiencing ALAN within their ranges in 1992, and that this percentage had increased by 2012. For almost all cactus species (89.7%) the percentage of their geographic range that was lit increased from 1992-1996 to 2008-2012, often markedly. There was a significant negative relationship between the species richness of an area, and that of threatened species, and the level of ALAN. Cacti could be particularly sensitive to this widespread and ongoing intrusion of ALAN into their geographic ranges, especially when considering the potential for additive and synergistic interactions with the impacts of other anthropogenic pressures. Download pdf