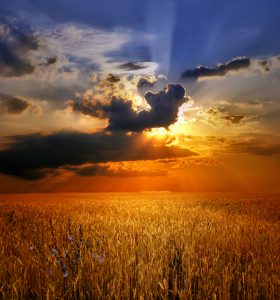 1. With climate change leading to poleward range expansion of species, populations are exposed to new daylength regimes along latitudinal gradients. Daylength is a major factor affecting insect life cycles and activity patterns, so a range shift leading to new daylength regimes is likely to affect population dynamics and species interactions; however, the impact of daylength in isolation on ecological communities has not been studied so far.

3. We show that food web dynamics indeed respond to daylength with one aphid species (Acyrthosiphon pisum) reaching much lower population sizes at the northern daylength regime compared to under southern conditions. In contrast, in the same communities, another aphid species (Megoura viciae) reached higher population densities under northern conditions.

4. This effect at the aphid level was driven by an indirect effect of daylength causing a change in competitive interaction strengths, with the different aphid species being more competitive at different daylength regimes. Additionally, increasing daylength also increased growth rates in M. viciae making it more competitive under summer long days. As such, the shift in daylength affected aphid population sizes by both direct and indirect effects, propagating through species interactions. However, contrary to expectations, parasitoids were not affected by daylength.

5. Our results demonstrate that range expansion of whole communities due to climate change can indeed change interaction strengths between species within ecological communities with consequences for community dynamics. This study provides the first evidence of daylength affecting community dynamics, which could not be predicted from studying single species separately.