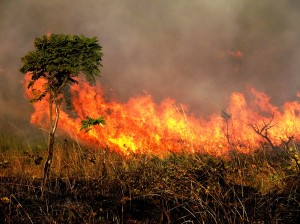 Fire is a key determinant of tropical savanna structure and functioning. High fire frequencies are expected to assemble closely related species with a restricted range of functional trait values. Here we determined the effect of fire on phylogenetic and functional diversity of woody species and individuals in savanna communities under different fire frequencies. We found phylogenetic signals for one third of the functional traits studied. High numbers of fires simultaneously led to phylogenetic over dispersion and functional clustering when communities were represented by mean trait values with all traits that putatively should be affected or respond to fire. This finding is important, because it shows that the relationship between ecological processes and the phylogenetic structure of communities is not straightforward. Thus, we cannot always assume that close relatives are more similar in their ecological features. However, when considering a different set of traits representing different plant strategies (fire resistance/ avoidance, physiological traits and regeneration traits), the results were not always congruent. When asking how communities are assembled in terms of individuals (not species) the outcome was different from the species-based approach, suggesting that the realised trait values – rather than mean species trait values – have an important role in driving community assembly. Thus, intraspecific trait variability should be taken into account if we want fully to improve our mechanistic understanding of assembly rules in plant communities. [Image: M.V. Cianciaruso]