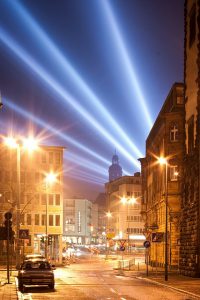 Organisms have evolved under stable natural lighting regimes, employing cues from these to govern key ecological processes. However, the extent and density of artificial lighting within the environment has increased recently, causing widespread alteration of these regimes. Indeed, night-time electric lighting is known significantly to disrupt phenology, behaviour, and reproductive success, and thence community composition and ecosystem functioning. Until now, most attention has focussed on effects of the occurrence, timing, and spectral composition of artificial lighting. Little considered is that many types of lamp do not produce a constant stream of light but a series of pulses. This flickering light has been shown to have detrimental effects in humans and other species. Whether a species is likely to be affected will largely be determined by its visual temporal resolution, measured as the critical fusion frequency. That is the frequency at which a series of light pulses are perceived as a constant stream. Here we use the largest collation to date of critical fusion frequencies, across a broad range of taxa, to demonstrate that a significant proportion of species can detect such flicker in widely used lamps. Flickering artificial light thus has marked potential to produce ecological effects that have not previously been considered.