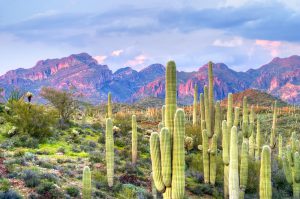 Determining how much biodiversity is captured by protected areas (PAs) can play a key role in meeting country commitments to international agreements such as the Convention on Biological Diversity, while analysing gaps in species coverage by PAs can greatly contribute to better locating new PAs and conserving species. It is troublesome, however, that regardless of their importance, global gap analyses have only been conducted for major taxonomic groups of vertebrates, such as amphibians, birds and mammals. Here we present the first global gap analysis for a complete plant group, the highly threatened Cactaceae. Using geographic distribution data of 1438 cactus species we assessed how well the current PA network represents them. Additionally, we performed systematic conservation planning analyses to identify priority conservation areas for cactus species that met and failed to meet conservation targets accounting for their conservation status. We found a total of 261 species with no coverage by PAs. Our results show that a greater percentage of cacti species (18%) are lacking such protection than for mammals (9.7%) and birds (5.6%), and there is also a greater percentage of threatened cacti species (32%) outside protected areas than for amphibians (26.5%), birds (19.9%) and mammals (16%). We found that the top 17% of the landscape that best captures covered species represents on average 52.9% of species ranges and half of its extent is distributed across 14 PAs. The priority areas for the gap and the unprotected ranges of partially‐gap species captured on average 75.2% of their ranges, of which 100 were threatened gap species. These findings, paired with knowledge of the threats affecting species, give important information better to plan conservation action for cacti and also support the importance of assessing the representation of major groups such as plants in determining the real performance of the current PA network.