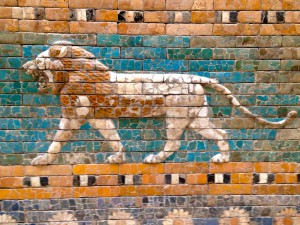 Terrestrial protected areas (PAs) are cornerstones of global biodiversity conservation. Their efficacy in terms of maintaining biodiversity is, however, much debated. Studies to date have been unable to provide a general answer as to PA conservation efficacy because of their typically restricted geographic and/or taxonomic focus, or qualitative approaches focusing on proxies for biodiversity, such as deforestation. Given the rarity of historical data to enable comparisons of biodiversity before/after PA establishment, many smaller scale studies over the past 30 years have directly compared biodiversity inside PAs to that of surrounding areas, which provides one measure of PA ecological performance. Here we use a meta-analysis of such studies (N = 86) to test if PAs contain higher biodiversity values than surrounding areas, and so assess their contribution to determining PA efficacy. We find that PAs generally have higher abundances of individual species, higher assemblage abundances, and higher species richness values compared with alternative land uses. Local scale studies in combination thus show that PAs retain more biodiversity than alternative land use areas. Nonetheless, much variation is present in the effect sizes, which underscores the context-specificity of PA efficacy.