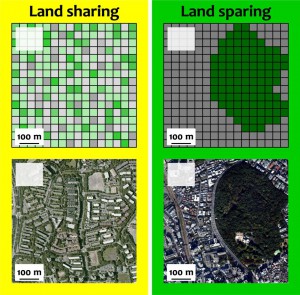 As cities around the world rapidly expand, there is an urgent need to implement the best development form to minimize the negative impacts of urbanization on native biodiversity. Two divergent forms for the expansion of cities are land-sharing and land-sparing developments. To date, their relative benefits for biodiversity conservation are poorly understood. We quantified the relative conservation benefits of land-sharing and land-sparing developments for butterflies and ground beetles in Tokyo, Japan. For each insect species, we determined which approach resulted in a larger total population size. At a higher level of urbanization (higher number of buildings in a landscape), land sparing rather than land sharing resulted in a higher total population size for the majority species of both taxa. However, at a lower level of urbanization, butterflies and ground beetles showed different responses to city development forms. Ground beetles had their highest total population sizes under land sparing, whereas for butterflies, especially open-land and matrix-dwelling species, larger populations were achieved under land sharing. The negative impacts of urbanization on biodiversity differ greatly between land-sharing and land-sparing development forms. We also revealed that the relative conservation benefits of land sharing and land sparing depend on the level of urbanization. In areas that will be heavily urbanized in the future, city planners and policymakers should adopt approaches that follow a land-sparing strategy and that keep large blocks of greenspace free from development. At lower levels of urbanization, on the other hand, as land sharing was suggested to be the better strategy for many butterfly species, a hybrid development form could be adopted that integrates areas of land sharing and land sparing, which might have the additional benefit of enhancing the delivery of some ecosystem services by bringing nature and people closer together in some areas.