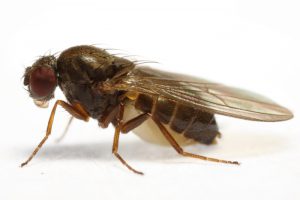 Local adaptation, where fitness in one environment comes at a cost in another, should lead to spatial variation in trade-offs between life history traits and may be critical for population persistence. Recent studies have sought genomic signals of local adaptation, but often have been limited to laboratory populations representing two environmentally different locations of a species’ distribution. We measured gene expression, as a proxy for fitness, in males of Drosophila subobscura, occupying a 20° latitudinal and 11 °C thermal range. Uniquely, we sampled six populations and studied both common garden and semi-natural responses to identify signals of local adaptation. We found contrasting patterns of investment: transcripts with expression positively correlated to latitude were enriched for metabolic processes, expressed across all tissues whereas negatively correlated transcripts were enriched for reproductive processes, expressed primarily in testes. When using only the end populations, to compare our results to previous studies, we found that locally adaptive patterns were obscured. While phenotypic trade-offs between metabolic and reproductive functions across widespread species are well-known, our results identify underlying genetic and tissue responses at a continental scale that may be responsible for this. This may contribute to understanding population persistence under environmental change.