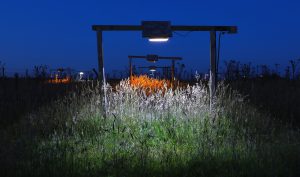 White light-emitting diodes (LEDs) are rapidly replacing conventional outdoor lighting technologies around the world. Despite rising concerns over their impact on the environment and human health, the ﬂexibility of LEDs has been advocated as a means of mitigating the ecological impacts of globally widespread outdoor night-time lighting through spectral manipulation, dimming and switching lights off during periods of low demand. We conducted a three-year ﬁeld experiment in which each of these lighting strategies was simulated in a previously artiﬁcial light naive grassland ecosystem. White LEDs both increased the total abundance and changed the assemblage composition of adult spiders and beetles. Dimming LEDs by 50% or manipulating their spectra to reduce ecologically damaging wavelengths partially reduced the number of commoner species affected from seven to four. A combination of dimming by 50% and switching lights off between midnight and 04:00 am showed the most promise for reducing the ecological costs of LEDs, but the abundances of two otherwise common species were still affected. The environmental consequences of using alternative lighting technologies are increasingly well established. These results suggest that while management strategies using LEDs can be an effective means of reducing the number of taxa affected, averting the ecological impacts of night-time lighting may ultimately require avoiding its use altogether.