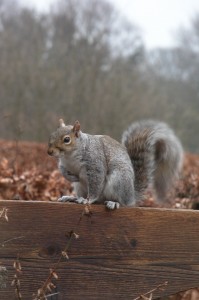 Urbanisation is widely considered to promote the establishment of non-native species, but there is limited empirical evidence of the ecological factors driving their responses. The grey squirrel Sciurus carolinensis (Gmelin 1788) is native to North America, but is widespread in the UK and is starting to spread across Europe. It is regarded as one of the world’s worst invasive animals due to its adverse impacts on native biodiversity. We use the non-native grey squirrel population in Sheffield (UK) as a case study to assess which factors limit its distribution and abundance in urban environments. In 2010 the city-wide population of adult squirrels peaked at an estimated 6539 in autumn (0.46 squirrels/ha), with maximum local densities of 8.29/ha. These densities appear to be slightly lower than those recorded in urban environments in the species’ native range. Grey squirrels occurred more frequently at urban sites with larger amounts of green-space in the surrounding region. Local habitat characteristics were, however, more powerful predictors of urban grey squirrel occurrence and abundance than regional availability of green space. Canopy cover, seed bearing trees and supplementary feeders, provided for garden birds, positively influenced grey squirrels. The potential for grey squirrels to connect city dwellers with nature thus appears to be highest in urban locations that have considerable capacity to support native biodiversity. The beneficial impacts of supplementary feeding on grey squirrel populations is notable given concerns that squirrels can adversely influence bird populations. These habitat associations also imply that grey squirrels typically respond negatively to urbanisation, which challenges arguments that urbanisation favours exotic species.