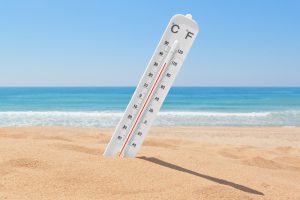 Considerable evidence exists for local adaptation of critical thermal limits in ectotherms following adult temperature stress, but fewer studies have tested for local adaptation of sublethal heat stress effects across life-history stages. In organisms with complex life cycles, such as holometabolous insects, heat stress during juvenile stages may severely impact gametogenesis, having downstream consequences on reproductive performance that may be mediated by local adaptation, although this is rarely studied. Here, we tested how exposure to either benign or heat stress temperature during juvenile and adult stages, either independently or combined, influences egg-to-adult viability, adult sperm motility and fertility in high- and low-latitude populations of Drosophila subobscura. We found both population- and temperature-specific effects on survival and sperm motility; juvenile heat stress decreased survival and subsequent sperm motility and each trait was lower in the northern population. We found an interaction between population and temperature on fertility following application of juvenile heat stress; although fertility was negatively impacted in both populations, the southern population was less affected. When the adult stage was also subject to heat stress, the southern population exhibited positive carry-over effects whereas the northern population’s fertility remained low. Thus, the northern population is more susceptible to sublethal reproductive consequences following exposure to juvenile heat stress. This may be common in other organisms with complex life cycles and current models predicting population responses to climate change, which do not take into account the impact of juvenile heat stress on reproductive performance, may be too conservative.