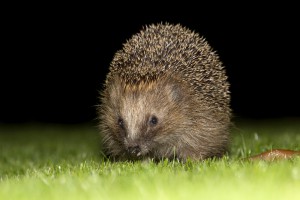 The continuous increase in the intensity and extent of anthropogenic artificial light has significantly shaped Earth’s nighttime environment. This environmental change has effects across the natural world, with consequences for organismal physiology and behaviour and the abundances and distributions of species. Here, we evaluate for the first time the relations between the spatio-temporal patterns of anthropogenic nighttime light and the distribution of terrestrial mammals, one of the most endangered species groups and one that expresses varying time partitioning strategies. Using descriptive statistics, trend tests and spatial prioritization analysis we show that in most places on earth there is a terrestrial mammal species whose range is experiencing detectable artificial light. For most species this tends only to be for small parts of their range, and those affected across large parts are typically rare. Over time (1992–2012), an increase in mean light intensity was found for the ranges of the majority of species, with very few experiencing a decrease. Moreover, nocturnal species are more likely to experience an increase in light within their ranges. This is of conservation concern as many terrestrial mammals are nocturnal and therefore often particularly vulnerable to a pressure such as artificial light at night.