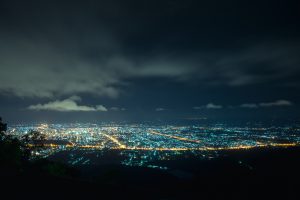 A central aim of the “lighting revolution” (the transition to solid-state lighting technology) is decreased energy consumption. This could be undermined by a rebound effect of increased use in response to lowered cost of light. We use the first-ever calibrated satellite radiometer designed for night lights to show that from 2012 to 2016, Earth’s artificially lit outdoor area grew by 2.2% per year, with a total radiance growth of 1.8% per year. Continuously lit areas brightened at a rate of 2.2% per year. Large differences in national growth rates were observed, with lighting remaining stable or decreasing in only a few countries. These data are not consistent with global scale energy reductions but rather indicate increased light pollution, with corresponding negative consequences for flora, fauna, and human well-being.