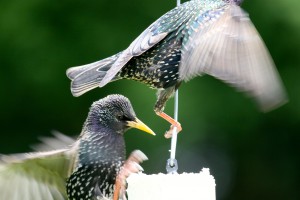 Biodiversity is undergoing unprecedented global decline. Efforts to slow this rate have focused foremost on rarer species, which are at most risk of extinction. Less interest has been paid to more common species, despite their greater importance in terms of ecosystem function and service provision. How rates of decline are partitioned between common and less abundant species remains unclear. Using a 30-year data set of 144 bird species, we examined Europe-wide trends in avian abundance and biomass. Overall, avian abundance and biomass are both declining with most of this decline being attributed to more common species, while less abundant species showed an overall increase in both abundance and biomass. If overall avian declines are mainly due to reductions in a small number of common species, conservation efforts targeted at rarer species must be better matched with efforts to increase overall bird numbers, if ecological impacts of birds are to be maintained.