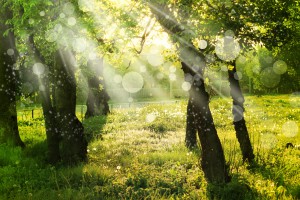 Urbanization is one of the major environmental challenges facing the world today. One of its particularly pressing effects is alterations to local and regional climate through, for example, the Urban Heat Island. Such changes in conditions are likely to have an impact on the phenology of urban vegetation, which will have knock-on implications for the role that urban green infrastructure can play in delivering multiple ecosystem services. Here, in a human-dominated region, we undertake an explicit comparison of vegetation phenology between urban and rural zones. Using satellite-derived MODIS-EVI data from the first decade of the 20th century, we extract metrics of vegetation phenology (date of start of growing season, date of end of growing season, and length of season) for Britain’s 15 largest cities and their rural surrounds. On average, urban areas experienced a growing season 8.8 days longer than surrounding rural zones. As would be expected, there was a significant decline in growing season length with latitude (by 3.4 and 2.4 days/degree latitude in rural and urban areas respectively). Although there is considerable variability in how phenology in urban and rural areas differs across our study cities, we found no evidence that built urban form influences the start, end, or length of the growing season. However, the difference in the length of the growing season between rural and urban areas was significantly negatively associated with the mean disposable household income for a city. Vegetation in urban areas deliver many ecosystem services such as temperature mitigation, pollution removal, carbon uptake and storage, the provision of amenity value for humans and habitat for biodiversity. Given the rapid pace of urbanization and ongoing climate change, understanding how vegetation phenology will alter in the future is important if we wish to be able to manage urban greenspaces effectively.