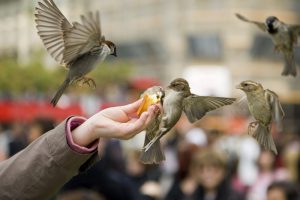 1. The spatial distributions of biodiversity and people vary across landscapes, and are critical to the delivery of ecosystem services and disservices. The high densities of people, and often of birds, in urban areas lead to frequent human-avian interactions, which can be positive or negative for people’s well-being. The identities of the bird species providing these services or disservices tend to be quite different, however it is unclear how their abundance and richness covary with human population density, and hence with potential recipients of these services and disservices.
2. We surveyed bird populations in 106 tiles (500×500 m) across the 174 km2 of an extended urban area in southern England. From the literature, we identified two groups of species: those associated with positive interactions for human well-being, and those that display behaviours that are negative for human well-being. We estimated the abundance (adjusted for detection probability) and richness of each group, and modelled how they covary with human population density.
3. Aggregation of population estimates for the 35 service and nine disservice species observed revealed 593,128 (95% confidence interval: 541,817-657,046) and 225,491 (200,134-235,066) birds, respectively. Across the surveyed tiles there were 1.09 service, and 0.42 disservice birds per person.
4. There was a peaking quadratic relationship between service abundance and human population density, but a negative linear relationship between richness and human density. Conversely, there were positive linear relationships for both abundance and richness of disservice species with human density. The ratio of service to disservice birds shifted from 3.5 to 1 at intermediate human densities to 1 to 1 in more densely populated areas.
5. Synthesis and applications. Differences in the distributions of service and disservice species, and the extremely low ratios of birds to people particularly in socioeconomically deprived areas, mean that people there have few opportunities for contact with birds, and the contact that they do have is equally likely to be negative as positive for human well-being. We recommend spatial targeting of improvements in green infrastructure, combined with the targeted provisioning of food and nesting places for service species, to promote positive interactions between birds and people.