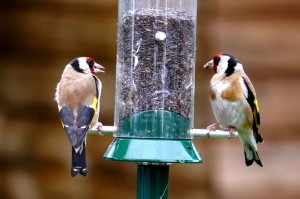 In highly urbanized nations, domestic gardens can play a significant role in maintaining biodiversity and facilitating human-wildlife interactions, which benefit personal and societal health and wellbeing. The extent to which sociodemographic and socioeconomic factors are associated with engagement in wildlife gardening activities remain largely unresolved. Using two household-level survey datasets gathered from across Britain, we determine whether and how the socioeconomic background of a household influences participation in food provision for wild birds, the most popular and widespread form of human-wildlife interaction. A majority of households feed birds. House type, household size and the age of the head of the household were all important predictors of bird feeding, whereas gross annual household income, the occupation of the head of the household, and whether the house is owned or rented were not. In both surveys, the prevalence of bird feeding rose as house type became more detached and as the age of the head of the household increased. A clear, consistent pattern between households of varying size was less evident. When regularity of food provision was examined in the study cities, just 29% of households provided food at least once a week. The proportion of households regularly feeding birds was positively related to the age of the head of the household, but declined with gross annual income. As concerns grow about the lack of engagement between people and the natural environment, such findings are important if conservation organizations are successfully to promote public participation in wildlife gardening specifically and environmentally beneficial behaviour in society more generally. [Image: M.J. Gaston]